What is the reason for the emergence of flowers in summer corn? 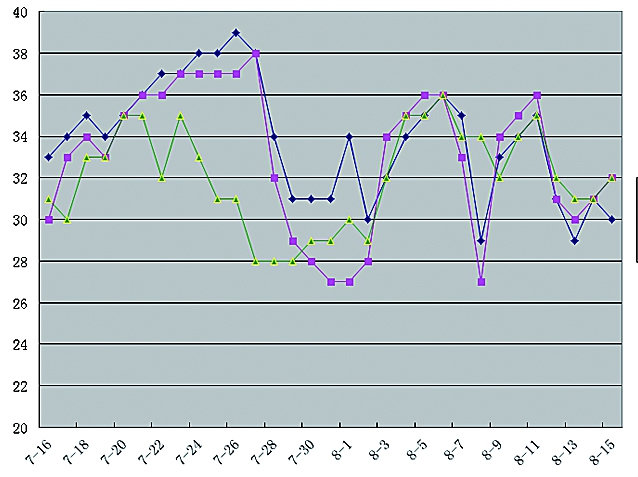 The highest temperature in some cities of Huanghuaihai from July 16th to August 15th (Source: 2345 Weather Forecast Website)

In the past two years, there have been different degrees of flowering and graininess in the production of summer maize in Huanghuaihai, which is more serious in northern Anhui and southern Henan. At present, there are some misunderstandings about the cause of the phenomenon of corn flower granules. The author believes that the real cause of flower granules is the unfavorable external environmental conditions during the pollination period. In order to analyze the real causes of the flower granules, the peasants can correctly understand and take scientific remedies to reduce losses.

Different varieties of flowers and grains Many farmers want to avoid the phenomenon of flower granules by selecting varieties. In fact, this is a misunderstanding. Maize belongs to the family Poaceae, Polygonaceae, Zea, and corn. Different corn varieties are very subtle hybrid differences in maize races. Under normal circumstances, hybrid corn varieties with stable performance all year round produce flower granules, which are mainly affected by external weather conditions and environment.

The color of the corn shaft is determined by the gene controlling the axis color, and has little correlation with the genes controlling Other traits. To make a simple analogy, just as human eyelids are not necessarily related to height, weight, and whether they are susceptible to diseases. Corn shaft color is not necessarily related to production and high temperature resistance. When the extreme weather conditions that cause the flower granules appear, the degree of flower granules is different due to the different sowing time of different plots and the different pollination period. It is precisely because the farmers selectively plant different shaft color varieties in different plots, which produces a wrong reflection of the different degree of flower size between the red and white shaft varieties.

The tassel branching is different from the different flower granules. The corn is a typical cross-pollinated crop. On the same plant, the tassel extraction time is generally 2 to 4 days earlier than the silking of the ear, and the loose powder is started 2 to 5 days after heading. Each tassel has 3 to 25 branches, and has 2,000 to 4,000 florets, producing 15 to 50 million pollen grains. Under normal circumstances, the number of grains in a single corn ear is 400-700, and the supply of pollen far exceeds the demand for the ear. That is, regardless of the number of tassel branches, the amount of pollen required for the ear is sufficient. Moreover, the more branches of tassels, the stronger the shading effect on the leaves; the larger the amount of pollen, the more nutrients are consumed. Therefore, modern corn varieties have fewer branches or a smaller specific gravity to facilitate ventilation and light transmission, reduce nutrient consumption during the loosening process, and increase the resistance of the corn population.

What causes the flower grain?

The real reason for the appearance of corn granules is the unfavorable external environmental conditions during the flowering pollination period. Although the extreme external conditions will not last forever, if it occurs when a certain area of â€‹â€‹corn is flowering and pollinating, the flower granules of the plot will be severe.

The pollination period is a period in which the temperature, humidity and soil moisture are strict and the most sensitive during the lifetime of the corn. The average temperature is 25-28 Â°C, the relative humidity of the air is 65%-90%, and the relative water content of the soil is about 80%. It is more suitable for pollination of corn. When the temperature is higher than 32 Â° C and the humidity is lower than 50%, the flowering is rapidly reduced, and the pollen loses its activity within 1.5 hours; when the temperature is at 32-35 Â° C, the air humidity is close to 30%, and the relative water content of the soil is less than 70%. At the time of flowering, the flowering period is shortened, the pollen of the tassel is rapidly dried and loses vitality, and the silking of the ear is delayed, resulting in the flowering of the male and female flowering period; when the temperature is higher than 38 Â°C, the corn pollen is dead, the filament Loss of fertilization ability, unable to complete the fertilization process and the appearance of flowers. When the relative humidity of the air is >90%, the pollen swells and ruptures, which is the cause of the rain caused by the rain during the loose powder.

In addition, the field pests bite the filaments, so that the fertilization of the ears is blocked, which will also lead to flower granules; the field fertility is insufficient, the nutrient supply is not enough, the photosynthesis is weakened, the carbohydrate supply is decreased, and the seeds are aborted after pollination. Flower grain.

From this point of view, the phenomenon of flower granules caused by poor pollination, in addition to high temperature as the main factor, there are air relative humidity, soil relative water content, field fertility and drought caused by the male and female uncoordinated reasons.

For example, the flowering and pollination period of summer maize in northern Anhui is in late July and early August. In late July 2017, the temperature in northern Hebei exceeds 35 Â°C every day. At this time, the pollinated corn is not strong or flowery, and between varieties The difference is not obvious; the flowering pollination period in the early August, although the temperature is lower than 35 Â° C, but due to the soil relative water content, air relative humidity, fertility and pests and diseases, the degree of flower grain is also different.

Therefore, the following phenomena may occur:

Phenomenon 2: Different varieties are sown in the same period, because the growth period is different, the flowering pollination time is not the same, and the degree of flower granules caused by high temperature heat damage is also different.

Phenomenon 3: Different plots of the same variety are sown at the same time. The soil moisture conditions are different and the degree of flower granules is different. The plots of the drought-affected plots are heavier, and the plots of the plots that are not affected by drought are lighter.

The author believes that there are five measures to prevent the occurrence of flower particles:

First, pay attention to the medium and long-term weather forecast, and combine the growth period of the variety, choose the appropriate sowing time, so that the corn pollination period avoids the high temperature period above 35 Â°C. The use of wide and narrow rows of plants is conducive to improving the ventilation and light transmission conditions in the field, cultivating robust plants, and increasing the resistance to high temperature damage. Appropriate reduction of density can promote the healthy development of individuals and reduce heat damage.

Second, high temperature is often accompanied by drought, timely irrigation, improved soil moisture, can prevent the occurrence of "ka neck drought", promote the development of ear, and promote normal pollination and fertilization of corn. Pre-irrigation during high temperature can directly reduce the field temperature. At the same time, the corn plants obtained sufficient water after irrigation, and increased the relative humidity of the air in the microclimate, which is conducive to corn pollination.

The third is the perennial high temperature heat damage prone area, you can try to use different maturity (flowering period difference of about 3 days) varieties for planting. If a 1:1 seeding technique is adopted, the pollination time of the entire field is extended by the combination of varieties to reduce the risk.

The fifth is the place where conditions are available. During the flowering pollination period, artificial pollination can be carried out in the morning when flowering.

(Author Du Xiong, an expert in the corn industry system in Hebei Province and an associate professor at the Agricultural College of Hebei Agricultural University)

we are specialized manufacturers from China on PPE Export Whitelist,

we have the perfect after-sales service and technical support. Look forward to your cooperation!